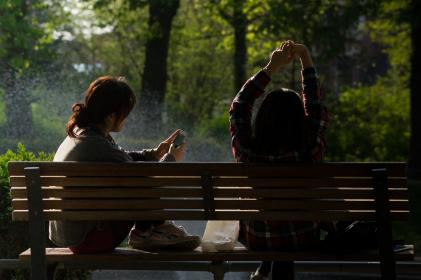 Are you a phubber?   Ever been talking with someone (in person), your phone sounds, and without even thinking, you look away in the middle of the other person’s sentence?  Then yup, you’re a phubber – snubbing someone to shift your attention to your phone.

Electronic Attachment Disorder has become an illness. It’s all around us, and we’re all suffering.

As I sit here in a Starbucks writing, I am watching a couple sitting at the table next to me having coffee, and not interacting with each other – at all.  No doubt they came here under the guise of connecting and spending time together, and yet they’re both looking at their phones, sipping their coffee and not saying a word to each other.  I catch them sneaking peeks at each other, but not making any eye contact.  It’s as though they want to look at each other and want to talk with each other, and they’ve just forgotten how.  To some extent, they have.

This is the state of our relationships today – we spend hours and hours on social media and pretend that we’re so well connected, and yet we’re not.  It’s all a facade.  And when we sit across from each other, any emotional intimacy in the relationship is so intolerable that we have to disconnect in order to stay in our seats.  The same way our attention spans have shrunk, so has our ability to stay connected to each other, and to ourselves.

In a recent study, 87% of teens responded they would rather communicate via text than have a conversation.  If that statistic doesn’t scare you, it should.

Most of us don’t know how to talk to each other anymore without our phones. “Did I show you this picture of my dog?”  “Have you seen this new video on Facebook?”  “Did I show you this cool new app?”  Or we’re so distracted by our phones that we lose a conversation right in the middle of it.  We phub our friends and we don’t even notice.  To a certain extent, neither do they.  It’s become a “normal” part of our lives these days.

As a psychotherapist, it scares me deeply.

We’re raising an entire generation of children who don’t know how to interact with anyone because that’s what’s being modeled for them. They learn how to behave by witnessing what is “normal” in other people, and sadly, being more connected to our phones than each other is the new normal.  What’s worse is that, as a result, they have no capacity to tolerate intimacy and love, which just creates a vicious loop of disconnection.  When love and intimacy are offered to them, they can’t tolerate it, and so they disconnect even more.

Children – and especially babies – learn how to emotionally attach through touch and through eye contact.  And yet so often when I see a child attempting to interact with her parent – or primary caregiver – the parent is so involved with his/her electronic device that even when they respond through words, they’re not looking at the child, only to have the child walk away in despair.  Research has shown that babies will get highly agitated by the lack of connection with a parent and because that lack of attunement by the caregiver disrupts their nervous system, eventually they give up trying and just disconnect.

Research by Catherine Steiner-Adair for her book, The Big Disconnect, Protecting Childhood and Family Relationships in the Digital Age, where she interviewed 1,000 children between 4-18 years old revealed, “…when parents focus on their digital world first — ahead of their children — there can be deep emotional consequences for the child.”  Steiner-Adair adds, ‘We are behaving in ways that certainly tell children they don’t matter, they’re not interesting to us, they’re not as compelling as anybody, anything, any ping that may interrupt our time with them,” she says.” (NPR Healthy Shots:  https://www.npr.org/sections/health-shots/2014/04/21/304196338/for-the-childrens-sake-put-down-that-smartphone)

Think about the long-term ramifications of that.  That disconnection is dangerous – for them, and for our future as a species.  If you don’t think it’s real, watch the film Men, Women and Children.  It’s a wake up call about the effects of the digital world on our day to day lives and relationships.  We’re raising a generation of children who can’t tolerate intimacy, and who are disconnected from themselves and each other.  It’s no coincidence there’s a heroin epidemic in this country.  Kids are feeling a deep sense of emptiness and filling it the only way they know how.

We all have the innate capacity to tolerate love and to get connected – really connected – to ourselves and to each other. The best way I know how to start is by putting down our phones.