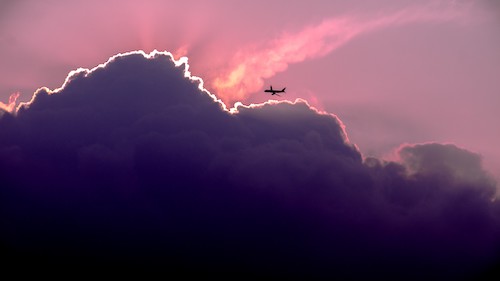 I was traveling with a colleague on a flight to Reno, Nevada last fall, and as we started our descent, we headed into heavy turbulence.  You know the kind.  It’s when the Captain tells the flight attendants to take their seats because they can’t predict how bumpy it’s going to be.   Reno’s not a fun airport to fly into under normal conditions because while the surrounding mountains make it beautiful, they also make for really windy weather.  On the particular day, the winds were at about 26 mph and it was raining. Hard.  As we bounced and bounced around during our descent, I started to feel more and more anxious…which is a polite way of saying I was terrified.

Sometimes when we’re in heavy turbulence and I’m feeling scared, I use a Somatic Experiencing® technique called voo-ing.  It’s a simple exercise wherein I take in a deep breath, and on the outbreath, I make a deep “voo” sound and allow it to resonate in my belly.  It calms the vagus nerve, which runs from the base of your brain to, among other things, the heart, lungs, diaphragm and digestive tract, and according to Dr. Amy Sedgwick of Soaring Crane Clinic in Encinitas, CA, [by] “consciously taking a deep breath it sends a signal through the vagus nerve that we are not in immediate danger [so] that we can calm down.”

Adding the “voo” on the outbreath serves to further calm the nervous system, so in moments of big fear, it helps tremendously for me to practice this simple but incredibly powerful technique.

One thing I know about fear is that when I’m in it, it helps to admit it out loud to someone else because then I don’t feel so alone.   So I turned to my colleague, who was as cool as a cucumber (then again, he jumps out of airplanes on a regular basis because he’s a skydiver), looked him right in the eye and said, “I just need to tell you, I’m really scared right now.”  He looked back at me, without missing a beat, and said in his best head-bobbing, attitude filled voice, “Well then starting voo-in’ mother*cker!”  After I finished laughing out loud – another great way to release fear – I started voo-ing and voo-ing and voo-ing and voo-ing, and before long, my body had calmed down.

Even if you’re not in big fear, but you’re feeling a little discombobulated, voo-ing can help ground you and feel more centered and calm.  And I don’t know anyone who doesn’t want a little more of that in their lives.

If you’re an anxious flyer like I am, it can really help to voo.  And in case you’re worried about looking weird if you try it, don’t be. The plane engines are so loud that no one will hear you.

I’ve flown quite a few times since then and every time we’re in turbulence, I find myself hearing my colleague’s voice in my head, laughing out loud, and then I “start voo-in’ mother*cker.”