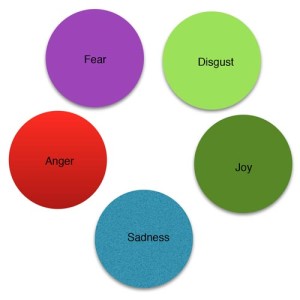 In a recent interview on NPR’s Fresh Air with Terry Gross, Pete Docter, the director of the new Inside Out movie, told a story of a young boy who was terrified to jump off the diving board, and then after seeing the film, was able to do it.  When asked why he was able to finally jump, the young boy replied, “I felt like fear had been driving, and I asked him to step aside.”  Being able to “meet the little voices inside his head” made a life-changing difference in that boy’s life, and frankly, it’s what we do in psychodrama every day.

We all live with those little voices – and no, it doesn’t mean you’re psychotic or schizophrenic – it just means you’re human. On any given day, we all have different feelings and thoughts that run through our minds – some that help us and some that work against us.

Through the power of psychodrama, you can take what’s going on in your head, personify it and put it out in the room so that you can work with it.  By having other group members play the roles of those voices, it allows you to dialogue with those parts of yourself to sort through which voices are helping and which ones aren’t.

In the course of what we call an intrapsychic psychodrama – a drama in which we are working with parts of self (as opposed to an interpersonal psychodrama, where you deal with your relationships with others), you can role reverse, that is, step into that voice – that other part of yourself – and speak from there, which can often open up feelings, thoughts, ideas and avenues that were previously blocked.   Other group members can also double you, or speak from your inside voice to say what you might not being saying, or even realize you’re thinking or feeling, which you can repeat or change if it doesn’t fit – allowing you to get at the core of the thought or feeling in a way you might not have been able to do yourself.

How cool would it be to fire certain voices, hire others ones, move them around, change your relationship with them or give them a whole new job description?   It’s your psychodrama – you can whatever you want!

Some people will do almost anything to avoid their feelings, particularly sadness.  Even the other feelings in the film – joy, fear, anger and disgust – work really hard to keep sadness out of the picture.  But sadness can be your friend.  No, really, it can be.  When trauma happens, as in Riley’s case in Inside Out, when her family moves from Minnesota to San Francisco, it makes a lot of sense that she’s sad.  Because of her father’s new job, she’s been moved away from her home, her school, her friends, her hockey league and her life as she’s known it for 11 years. But Riley doesn’t express her sadness – she turns to other feelings, like anger and fear, and it pushes people away rather than allowing them to come towards her.  After all, no one wants to get close to someone who’s angry and defensive, right?

When I began dialoguing with my anger many years ago in psychodrama, I discovered that while it had been a wonderful defense that protected me, I had little or no access to my sadness and fear.   While the anger had really benefitted me at another time in my life, it was getting in my way of connecting with people.  And so despite my fear, I had to take the risk – with safe people (and I can’t stress that enough!) to show them my sadness and my fear and allow them to be with me and comfort me, without “fixing” me, but just by witnessing me.   Because of my history of not being seen and learning that having a need meant I was needy or too sensitive, I had been afraid to show anyone my deep vulnerability.  But that’s where connection lives – in those intimate moments – and that’s where the emotional repair happened for me, and continues to happen every time I allow myself to go to that place with the right people.

One of the important things the film reminded me of is that without sadness in your emotional repertoire, life just doesn’t seem to matter. There’s a deadness inside and a sense that it’s all just pointless.  It’s only by going into and through the sadness, despite the fear that you’ll get lost in it or that people will use it against you, that you can find your way to the other side and come back to joy.  I often think of it like being in a car skidding on ice…your first instinct is to slam on the brakes and steer out of it, but that will only send you into a tailspin.  The only way out is through.  You have to steer into it, pump the brake and trust that eventually you’ll get through to the other side.

Anger pushes people away; sadness invites them to come closer.  Which one will you choose?